Moon over Soho by Ben Aaronovitch 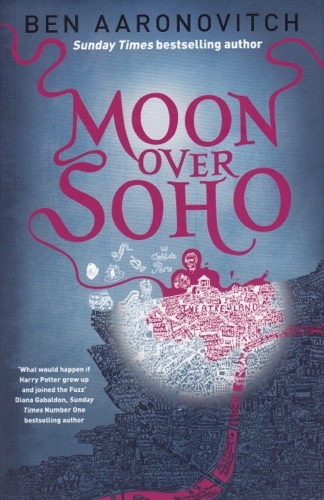 After reading ‘Rivers of London’ I immediately dove into the sequel, ‘Moon over Soho’. We are back with Peter Grant and DCI Nightingale and a case where something is quite off. And this time it hits a bit closer to home for Peter, as it is about jazz musicians in Soho, of which his father is one.
It starts when a jazz musician dies of a seemingly natural cause. However, Peter picks up a vestigium of a specific version of ‘Body and Soul’ and with help from his father’s extensive jazz collection, he starts investigating. On the other hand there is the ongoing issue of the penis-eating-lady (and not with her mouth…). In all the investigations Grant and Nightingale (who is still on stick leave because of his bullet wound from the last book) hit upon some practitioners of magic that Nightingale didn’t know existed, and who are into some seriously weird, dark and criminal stuff.
The book has the same feeling of fun, crime and magic as the first one. It took me a while to get into it because of the reminders in the start of the book (Grant has his stuff in the coach house because, the Folly is, magic is, I did this to Covent Garden and the Opera House). Because I had just read the earlier book this was annoying to me. If however there had been more time between books this would have been perfect, so I don’t fault Ben Aaronovitch for this at all. I was glad that Lesley was back in this book after the horrible events that happened to her in the last book, and it was fun that Peter figured more about magic and that he learns to use it in his own ways. We also find out a lot more about the world of magic (like the school Nightingale went to and the terrible events of the second World War). A great sequel to ‘Rivers of London’, five out of five stars.