The Liar by Stephen Fry 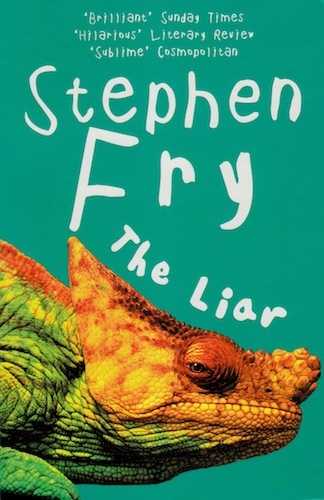 Stephen Fry is one of my favorite writers/actors/presenters/people. There isn’t much he’s done professionally that I don’t enjoy, and with regards to his books, I’m saving them so I can read a new one now and then. So, with my new resolve to read more books from my shelf (and stop buying so many new ones), it was time to read ‘The Liar’.
The Liar is and follows Adrian, from his days in a public boarding school to his days at Cambridge and after. He has always seen himself as very different from everyone else, and while he portrays himself to others as being very confident and independent, inside he is extremely insecure and alone. He gets caught up in an espionage plot by his professor at Cambridge which leads to an exciting time during the summer holidays in Europe.
The story is told in chronological disorder, with chapters bouncing from Adrian’s time at Cambridge back to public school and vice versa. The book is of course filled with Stephen Fry’s wonderful language, and I can hear him reading it to me. He makes me love the English language. Like another reviewer, I can see the similarities between his biography ‘Moab is my Washpot’ and this story, which makes me wonder if this story is his wishful thinking about his own life’s history. It made the book a bit less enjoyable to me, because that was always nagging me. The espionage part of the story didn’t do much for me. All in all, it was nice to read something by Fry, but it wasn’t as brilliant as I had hoped, so I give it three out of five stars.