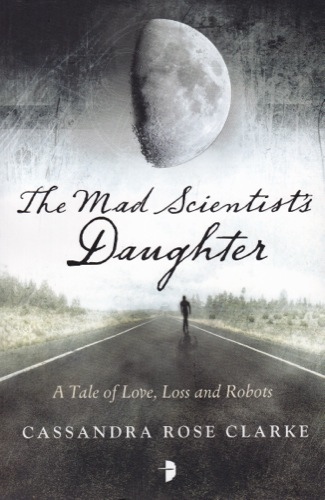 I don’t know it is a new thing or not, but these last few years there have been several books with settings that would place the book in the science fiction genre, but are so focused on another element of the story (love, grief) that I wouldn’t classify them as pure science fiction. And that is a good thing, because it makes science fiction so much more accessible to a broader crowd of people. ‘The Mad Scientist’s Daughter’ is one of those novels, focusing on love and life in a fast changing, near future, earth much different from ours.
Like I said, it is the (near-)future, and a great (natural) disaster has happened a few decades ago. However, mankind is not set back that much with regards to technical advances, and so robots/androids/automatons are becoming more and more normal. In the house of Cat, there lives a very special robot, called Finn, that is more like a human than any robot ever made. Her father brought him home when she was five, and since then he has been her tutor and friend. The book follows Cat in her life, from a little girl of five to a grown woman, and her feelings for Finn. These are influenced by the feelings of the public of ever more advanced robots in daily life, accumulating in the granting of basic rights to these robots.
I loved this book. I loved the characters, mainly Cat and Finn, and I loved reading about the struggles Cat is going through, because they felt very real. I can see someone reacting that way to the changing world around her, and I could even get into Finn’s character. Yes, this is a book about robots and a future earth, but to me it was very mild science fiction. These elements were in the background of the story, the main part is the changes and feelings our main characters are going through. A great read and I wish I knew of more books like this one. Five out of five stars.