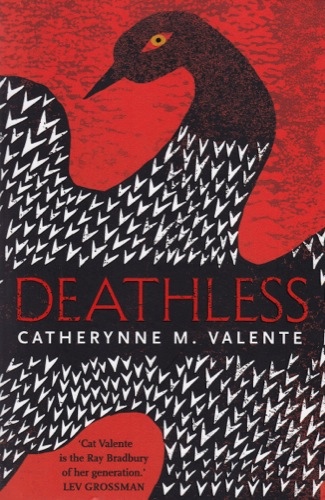 Deathless has been on my wish list for a long while, and I can’t even remember where I learned about this book. It took me a long while to find in a bookshop, but I finally did, and after reading it, I’m glad.
This is a story that is hard to describe. It takes place in Russia, at the beginning of the second world war, and balances on the edge between folklore and harsh reality. The main character, Marya Morevna, is a girl in St. Petersburg/Leningrad, who sees (and is not surprised by it) young birds falling out of the tree in front of her house, changing into handsome men and marrying her sisters. Despite the realities and truth of communism, she believes in magic. However, for her there seems to be no bird, and life gets tougher and tougher. Until one day, when she is not paying attention (so she doesn’t know the type of bird that fell from the tree) her future husband announces himself. He is Koschei the Deathless, one of the magic characters in Russian folklore, who is known to marry human girls. Marya goes with him and tries to defy the legend and change Koschei, but it is hard, both in the magical world and the real world.
On the one hand, I found it hard to get into this story. It reads like a fairy tale, and while the style is lovely, it seemed to expect some knowledge of the reader of Russian folklore. Not that you can’t understand the book without this knowledge, just be aware that it doesn’t explain everything from the start. The story itself sort of flows, and has different stages. I needed to be in the right mindset for it, but once I was there, it was very enjoyable. Four out of four stars.