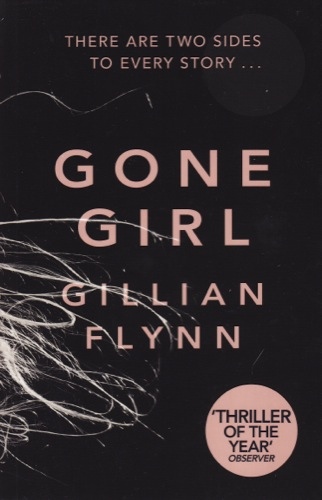 Gone Girl is a book I noticed being talked about more and more on Librarything, and creeping op on the lists of most wishlisted and most currently reading. While thrillers are not usually my genre, I felt intrigued and when I saw this book for sale (quite cheaply, yay England!) I could not resist.
This story is pretty twisted. Amy Dunne, happily (?) married to Nick, disappears on their fifth wedding anniversary. Pretty soon everyone suspects Nick, and to tell the truth, the evidence is pretty damning. But the story is told so that one chapter is told from Nick’s point of view, where he seems innocent and have an excuse for everything, and the other is told from Amy’s diary entries, where we see that he seems very different. Slowly the story develops and it turns out that these two deserve each other.
Even though a thriller (mystery, crime story) is not something I usually pick up, I enjoyed this book very much. I could not put it down, because I had to know how the two story-lines would match up in the end and why they were so different. The solution is far-fetched, but felt really well done. Four out of five stars.