The Long Earth by Stephen Baxter and Terry Pratchett 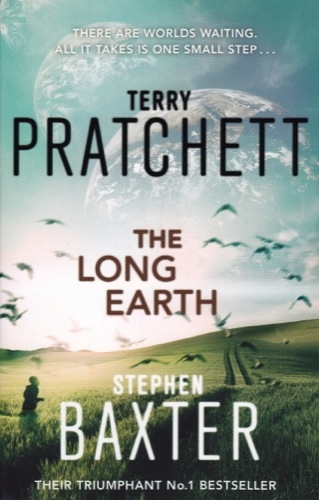 Terry Pratchett, who is of course famous for his long running Discworld series, has now written something a bit more science fiction, together with Stephen Baxter. I like Terry Pratchett’s Discworld series, and when I came across this book I could not resist getting it.
A new invention, a stepper, leads to the discovery that there are many (infinite?) parallel worlds. Using the device, you can ‘step’ one world east or west, and end up on the same location but in a world slightly different. What there worlds have in common is that humans are missing, although other creatures do exist in these worlds, albeit with slight variations, that grow the further you get from our Earth. Then there are natural steppers, people who find out that they don’t need the stepper to move between Earths. One of these natural steppers, Joshua Valienté is contacted by Lobsang, a Tibetan who has reincarnated in a computer. Together they travel the Long Earth, and discover more about it, including other humanoids living in it.
I loved this book and could not put it down. It deal mostly with exploration and discovery of the new Earths, but also with the social and political consequences of the discovery. For example, what about territory (and taxes and land ownership) in a parallel Earth? And what about the few people who cannot step? For me, the book has enough new concepts and thoughts about those concepts to be entertaining. The ending felt weird to me, and not a real ending. There is a part two, so maybe the link between those two books is pretty tight. It is a highly enjoyable story, with lovely new ‘aliens’ without ever leaving earth, and so many new possibilities stemming from this one possibility, stepping into a world a little to the left of us. The fact that this book is written by two writers isn’t really noticeable, although it doesn’t have the Pratchett humor I know from Discworld. Not that I missed it, the book is pretty great on its own. Four out of five stars.