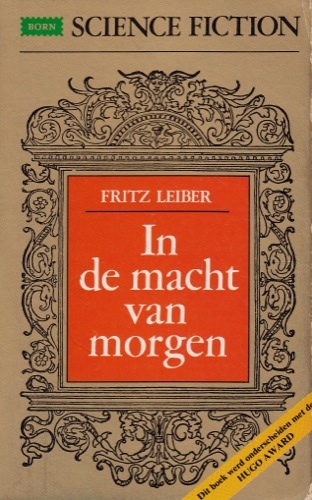 I am collecting and reading all Hugo winners (best novel), and this book, in English ‘The Big Time’ is one of those. It tells the story of a time travel war, in which soldiers are conscripted from all time periods, and fight in all time periods to change history. To cool down there are places outside of the time stream, like bars, with entertainers to take their minds of the war. The book is set in one of those places, and during a time of crisis in which they need to figure out who to trust and what is really going on with the war, we learn about the world Fritz Leiber has created for this book.
The setting is pretty claustrofobic, with all characters being in what seems one room and with no way out. Paranoia grows, and while much is told about the reality of the world they live in, it never becomes entirely clear to us, the readers, or them, the characters, what is going on and why. The story is pretty short, more of a novella these days that a novel. I find that this bothers me more and more about older novels, because I think that were this book written today, a modern-day writer would have expanded the story with more backstory. It is still entertaining to read, but not as much of a classic as other old Hugo-award-winners. Three out of five stars.