The Bonehunters by Steven Erikson 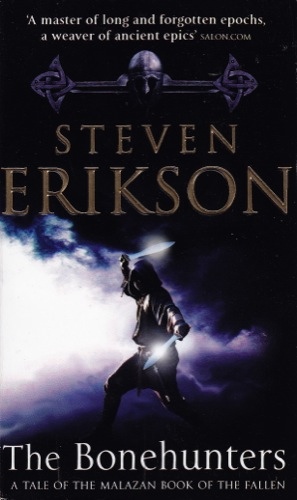 After reading Midnight Tides I immediately picked up the next book in The Malazan Book of the Fallen series by Steven Erikson. This book returns to the more usual characters and story style. We pick up right after the ‘battle’ between the army of the Whirlwind and that of Malazan led by Adjunct Tavore and for the most part follow the journey of her army through hell and back. We still see some of the previous characters (Yay, Karsa Orlong!) but they have moved a bit more to the background here. Like previous books, this is truly a part of a larger series, a work that cannot be read on its own. It didn’t grip me as much as the others did (certainly not as much as Midnight Tides did) but it was still Erikson, and still very good. Five out of five stars, and on to the next part!