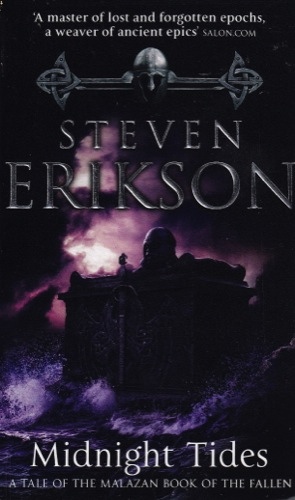 This is part five in Steven Erikson’s epic ‘The Malazan Book of the Fallen’ series. A series that has to be read completely and in order, because each book is a continuation of sorts of the last. Of sorts, because this book focuses on an area and characters we haven’t met before, but who have or will have a connection to the bigger story soon enough.

In this book we mostly meet Letherii (human people) and Tiste Edur from the land of Lether. The Tiste Edur are united for the first time under a Warlock King who has a new kind of power. He sends the four Sengar brothers to find a sword that has been given to him and can be found in the ice of the north. When one of the brothers touches the sword with his skin, something forbidden by the King, the world of the Tiste Edur changes. Meanwhile in Letheras (the capital of the Letherii empire), a city in an empire built on greed, we follow Tehol and his servant Bugg, two of the funniest characters in the series, who plot to bring down this economy of greed. When the Letherii plan to overtake the Tiste Edur and make them submit like many people before them, everything comes to a most awful head.

I loved the earlier parts of this series, and I loved this one even more. I think because the story was relatively simple (Tiste Edur on the one side, Letherii on the other) while still relating to the greater mythology of the series. Anyway, I couldn’t put this book down and finished it in just three days, and I moved straight on to the next one. Five out of five stars.