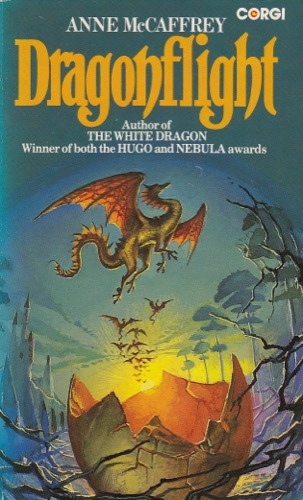 When I bought my big book haul at the end of last year, one of the series I got some parts of was the Dragonriders of Pern series by Anne McCaffrey. I am not quite sure what the Dutch publisher has done, but the first part I got in Dutch is actually the fifth part released. So, I started looking for the true first part (chronologically by release date) and found it a little while later.

Imagine a different planet. Colonized by humans from Earth with advanced technology, then abandoned. The world has ‘relapsed’ into a feudal medieval society. And there are dragons, bred to counter the threat of ‘threads’ of spores descending from a passing planet. These dragons are paired with a human with mental power and have a mental connection with them. In the novel it is four hundred turns (years) since the last passing of the planet, and the number of dragons has declined because not many people believe the threat is real. The story follows the recruiting of a new rider for a to-be-born Queen dragon, who is needed so that there can be more dragons.

The novel is pretty short, I think that if it were published today (it is from 1968) more parts would be combined into one novel. I liked the story, but it felt like an introduction to the series, because a lot of time was spent introducing the world, the history and the characters. This was still pretty good, but I am glad that I have part two (Dragonquest) already so I can move on to the next one quickly. I give this book four out of five stars.