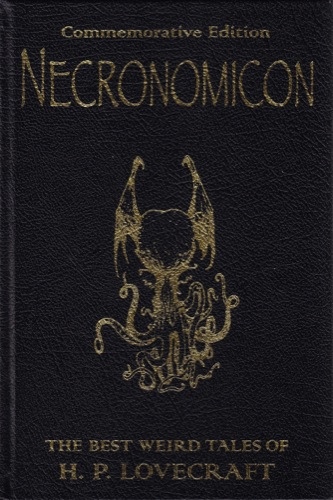 You really can’t read (about) horror or even science fiction without being aware of H.P. Lovecraft, especially the Cthulhu mythos he created and many writers elaborated on. So, when I saw this gorgeous hardback bound edition of his best weird tales, I was glad to find it on sale. This collection has many famous stories, including some in the Cthulhu Mythos (The Call of Cthulhu but also The Haunter of the Dark), the one novel in the 1001 list (At the Mountains of Madness) and the story written for/by Harry Houdini (Under the Pyramids).

I read the collection (nearly) back to back, including an additional three stories from some other bundles I had lying around that had much overlap with this edition. I do think that back to back is not the best way to read Lovecraft. When you read so many of these stories it becomes very obvious that the same structure is used over and over in a majority of them. We read the story of or about one man who had stumbled upon an ancient (horrible) mystery. He can’t help himself and goes to investigate, not believing the many warnings of the local people. He gets drawn in, uncovering something huge. When it is too late the full story reveals itself in full horror and all the main character can do is write it down before the end comes to warn others to stay away. However, the horror is almost never described in full detail, almost always we get glimpses because whatever it is, it is too horrible to describe. Most stories are related to the Cthulhu Mythos of Elder Gods and the Old Ones. Reading all these stories does give a good idea of this Mythos, as it is never revealed fully, but just through the discoveries of these unfortunate characters.

All in all I think this is a pretty good collection, with a biography of Lovecraft as a last chapter and some lovely illustrations. The stories were pretty good, knowing they are written pre-1937, but I can see how later fiction has grown from this to become better. I give this collection four out of five stars.