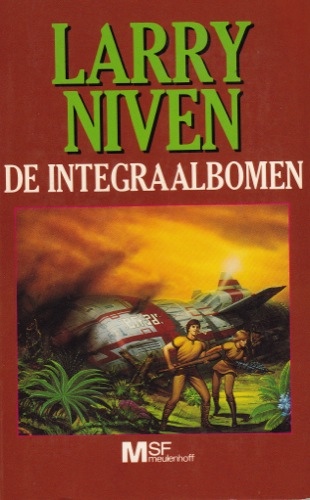 A couple of years ago, at my previous job, I was recommended ‘The Integral trees’ by Larry Niven. It took me forever to find this book in a shop, but when the huge book sale at work happened before Christmas last year, this was one of the books I picked up. I’ve read a few books by Niven, but all of them were Ringworld novels. This is a book in a different series (Smoke Ring or The State) and I didn’t like it as much as I liked the Ringworld novels.
This is the story of the Quinn tribe, who inhabit an integral tree in the smoke ring around Voy. The smoke ring is a ring of breathable air around Voy where life is possible. Because there is no land, and thus no gravity, everything flies and floats, including the trees. Humans have ‘landed’ in this area 500 years earlier, and have adapted to life on the trees (by having extra long toes and more length for example). The Quinn tribe lives on a tree in the tuft that is dying. There is a draught, and because of that, there is not enough food. A hunting party is sent out to climb the tree towards the center to find food and water. This is the start of a huge adventure where they not only find and fight food, but also other humans, other trees. Besides that they also discover more about the history of the humans that came so many centuries ago and the technology they had.
I don’t exactly know why this book didn’t grip me as much as Niven’s other books. Partly it is because it was a pretty linear adventure. A group sets out, and discovers all kinds of people and things, and they just keep going. Partly it is also because the involvement of the ship outside the Smoke Ring was so small. I saw later that there is a book before this one if you see it as part of “The State” series, so I will read that one soon to get more of the back story. All in all this was an enjoyable story, but not as good as I had expected, three out of five stars.