Memories of Ice by Steven Erikson 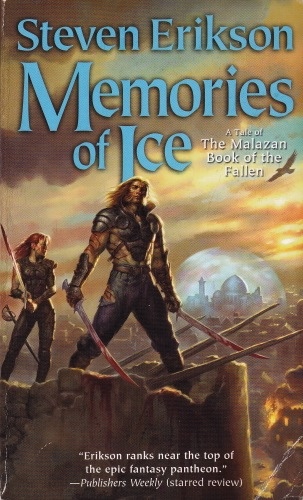 I just finished the third installment in Steven Erikson’s “Malazan Book of the Fallen” and while I loved it very much and I couldn’t put it down, I am finding it pretty hard to write a review that conveys my enthusiasm for this book and this series.The main reason for this is that I want to say that this book is ‘more of the same’. And that sounds like it is a bad thing, a boring thing, but for me this couldn’t be farther from the truth.

The third book in a series of ten, Memories of Ice takes place right after Gardens of the Moon and during Deadhouse Gates. In this book we mainly follow Dujek Onearm’s army, who have been exiled from Malazan. They join forces with their former enemies Caladan Brood and Anomander Rake to fight the Pannion Domin. This is a new empire trying to take over everything in sight, let by a Seer, and having a terrible cult-like way of life, which includes cannibalism as a strategy of reward and feeding, and having demon-like undead creatures with swords for hands. Meanwhile, Toc the Younger, the former Claw and Onos T’ooolan the T’lan Imass warrior meet up and meet Lady Envy, a powerful sorceres who has three Segulah warriors as servants. Ganoes Paran finds he has a new role he is reluctant to accept, and we are also introduced to some new characters, new gods, and new legends. In the background The Crippled God is playing a bigger and bigger role.

When writing that short summary (without trying to spoil too much) I realize just how much was in this book. I haven’t even named half the character (groups) and the new revelations in this novel. That’s why it is easier for me to see these Malazan books as one long story, with each book looking at a different aspect, group of people or location but still fitting in the bigger picture. The world Steven Erikson creates is so complex that I can see links appearing between events happening in this book and the previous one, and I am sure I (with my crappy memory for plot details and characters) am missing a whole lot of the finer points. I am still addicted to these books, and I can’t wait to start the next installment. Besides the complexity in legends, gods, magic and back story, I also enjoy something I loved in George R.R. Martin’s books, which is that characters can die. Even the heroes, even the ones you love. And they might die, not in a grand way, but in an ugly, stupid and preventable way. That makes the books even better to me, because they feel more honest. I am glad I discovered these books while the first series is finished so I can just read them all back to back. This one also gets five out of five stars. If you liked the first two, you’ll like this one.