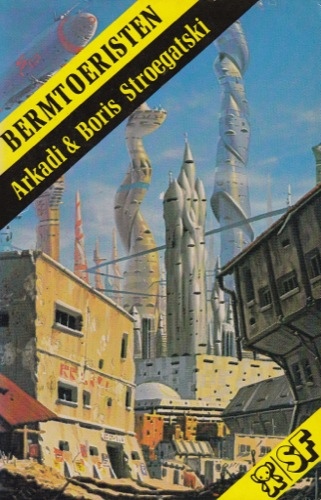 One of the SF Masterworks (a series of the best SF out there) is Roadside Picnic by Arkady and Boris Strugatsky (or Bermtoeristen by Arkadi and Boris Stroegatski in Dutch). Written in Russia in 1971, it tells the story of the Zone near Harmont. There are in total six of such Zones, results of the Visitation. Aliens have visited our Earth and have left debris in these Zones, leading to all kinds of strange effects.
In this story we follow Redrick “Red” Schuhart, a Stalker. A Stalker is somebody who goes into the Zone to get stuff to sell this on illegally. It is a dangerous occupation because besides the patrols and police, the Zone itself is quite deadline in all kinds of unexpected ways. The book has several chapters, all looking at Red or another character at some point in their lives.
As a reader we are told about life in Harmont, and what is found in the Zone. However, as the people researching or gathering these things don’t know what they are and what they are for, neither do we. The same goes for the Visitation itself. Nobody knows who the aliens where, and why they came. Why are the Zones there? This book doesn’t offer any answers, instead it deals with the emotions and thoughts of mainly Red the Stalker. A nice, thoughtful and short novel (which of course I would have liked to be longer so it could feature more explanations). Four out of five stars.