The Last Werewolf by Glen Duncan 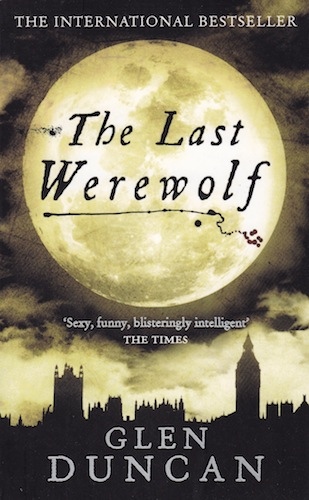 I heard about this book on the forums of LibraryThing, and was instantly intrigued. A story about the last werewolf in the world and the end of his life, because what is there to go on for after two hundred years and with nobody else left?
The world Duncan creates is the one we live in, we just don’t know everything that is going on. Not only are there werewolves, but there is WOCOP, the agency charged with hunting them down (and partly responsible for their extinction). And there are vampires, who live in a kind of truce with WOCOP, and with intense hatred for the werewolves (hatred which is mutual). Jake Marlowe, the last werewolf doesn’t have much to live for anymore, and just wants to give himself up to WOCOP to let them finish their task. But then things happen to change his mind and his worldview, and start a whole new adventure for him.
The book was good. Not great, but pretty good. I liked the world Duncan creates, and the mythology surrounding the supernatural beings. I got used to the literary style, although I could have done without it. I agree with other reviewers that the sex (and the style of writing about it) seemed a bit too much and too vulgar, and that the first 2⁄3 of the book were pretty slow (and annoying, I get it, you are the last, you are depressed). But for me, it was interesting enough to be hooked by it, so I give it four out of five stars, and will look for the sequel