Stranger in a Strange Land by Robert A. Heinlein 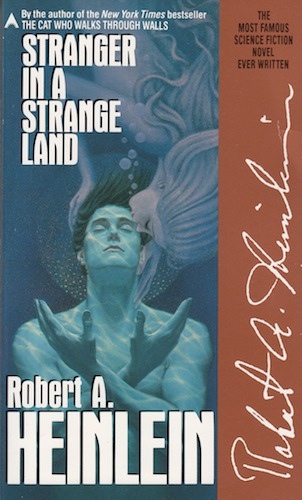 I love to read Science Fiction, and have a collection of Science Fiction books. But this love originally came from my dad. He also read a lot of Science Fiction novels, and introduced me to Greg Bear (The Song of Earth and Power, because I was heavily into Fantasy back then) and Jack Vance. Now his books are in the attic, and now and then I go through them and take some (books, boxes, who’s counting ;)). With this book it was funny, because I bought this book in Cologne, and a week or so later went through my dad’s books, and found the same book there too. Ah well, at least it shows we are into the same novels, which I always like to find out. Anyway, I picked this one up because of its Hugo win.
This is the story of Valentine Michael Smith, a human raised among Martians who returns to earth with insights we are not used to. He tries to grok everything around him, a word that can be translated to mean ‘understand’, but understand in such a way he can also manipulate objects. For me, this novel falls apart into two sections, the one where Michael is held or claimed by the government, and the one where he is independent. The first part I didn’t like at all, I hate bureaucrats and politicians, and it had way too much of that. What I did like were the descriptions of Michael’s peculiarities and the glimpses we get of Martian life. The second part was ok, pretty religious/philosophic where Michael discovers the world and starts his church. This part was better, because we get to see more of his uniqueness, and we also get more of a back story.
Like other reviewers have said before me, in mentality, this book does show its age. It is very sexist (women in the kitchen and subservient) and homophobic (free love means men share women, not men love men). And the funny thing is, while I have complained in earlier reviews that older books were too short, this one felt too long. And I didn’t even read the uncut version. All in all, nice to have read for the historic value of the work as a Hugo winner, but not one of my favorites by far. Three out of five stars.