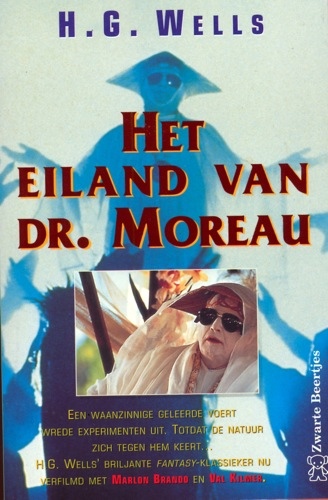 H. G. Wells is one of the classic writers of science fiction, even though it might not have been known as such back then. I love to read my classics, and after reading Robinson Crusoe earlier this week I was in the mood for more classics. And this book also is a story written by a castaway living on an island.
Only Edward Pendrick isn’t alone. He is saved alone by a ship that is carrying Mr. Montgomery to a strange island, together with a menagerie of animals. After arriving on the island, the captain of the ship is so annoyed by the filth of the animals and the strange servant of Montgomery, he kicks everyone off, including Pendrick, who is forced to stay on the island to wait for the next ship, which might not come for a year. The owner of the island, Dr. Moreau, isn’t happy with Pendrick’s arrival, and Pendrick knows something very strange is happening. There are strange human-like creatures on the island who are ‘wrong’ somehow. He is not allowed to explore the buildings where they live, but hears the most horrible screams all day long. Slowly he discovers the horrible truth, and must fight for his life.
The story is pretty short (158 pages in my Bruna, 1997 edition), but very powerful. I love the writing style, I really can see the island in my mind. It is a pretty horrific story, but a very good read. Four out of five stars.