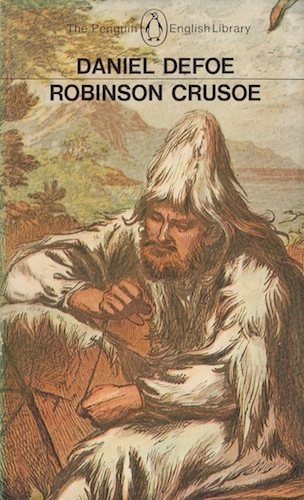 Recently one of my colleagues and friends gave me a big pile of English classic fiction. Yay! I couldn’t wait to start one, and the first one that grabbed my attention was ‘Robinson Crusoe’ by Daniel Defoe, the classic story of the castaway on a tropical island.
- Warning, this summary has plot-line spoilers, however, this is a 300 year old story, so I figured most people know it anyway –
That was actually all I knew about the story, that Crusoe was a castaway who lived on an island for a long time, with a man named Friday. The book itself cover a lot more. It starts when Crusoe leaves his (British) home (against the advice of everybody) to go to sea. He has a few adventures (including being held as a slave in Morocco for two years) and starts a plantation in Brazil. It is when he goes to get slaves for his plantation and those of associates (cutting out the slave traders) that he is involved in a shipwreck and arrives on his island. In my book we are nearing page 100 of 300 by now. He is the only survivor, and spends his time gathering supplies from the wreck of the ship he was on, building a safe place to live, and gathering food. After a while he has a nice life going, with a comfortable home (including self-made furniture), animals (cats and goats) and food growing nearby (barley, rice and grapes). He discovers that the island is frequented by cannibals, and one day frees one of their victims, who will become Friday, his servant. A couple of years later one of the Spanish sailors who have apparently stranded on the mainland in the cannibals’ villages is also brought to the island to be eaten, and is also freed by Crusoe and Friday. Friday’s father was also with them, and was also freed. Later on the Spaniard and Friday’s father go back to the mainland to get help and see if Crusoe will be safe there. When they are gone, an English ship appears, apparently under mutiny. Crusoe and Friday free the original captain and help him and his crew take back the ship. Eventually the ship takes him back to Europe. He arrives back in England discovering almost his entire family is dead. He goes to Portugal to claim his Brazilian estate and travels back to England overland, having an adventure with wolves and bears in the Pyrenees. Eventually he decides he cannot go back to Brazil and sells his estate, marrying and having kids in England.
- End of spoilers –
The story has so much more than Crusoe on an island. Sometimes it is a bit too much (like the LotR movies, it seems to have several endings yet keeps going), but I can’t really be annoyed by it, as it is such an old book (293 years!) and who knows what was normal in writing back then. The book itself is very readable. Defoe rambles on sometimes (long sentences of a paragraph), and some themes aren’t very proper anymore (black man is a servant or slave automatically, is naturally dumber) but that is to be expected. I enjoyed it very much, and give it four out of five stars.