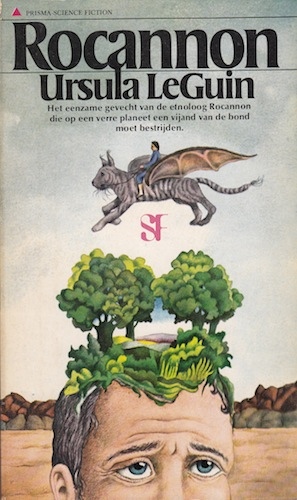 Ever since reading Wizard of Earthsea I have loved Le Guin, and I have been slowly collecting (second-hand) copies of her work. Recently I found Rocannon (Rocannon’s world), a book in the Hainish Cycle.
It is the story of Rocannon, an anthropologist on an alien planet. On the planet there are several humanoid species which are living in an iron/bronze age level of development. The story is divided into two parts, all involving Rocannon, but spanning many (planet) years. The first story is very traditional, about one of the upper-class species families who has lost all its wealth because of the aliens. The wife wants her wealth back, and starts an adventure to find a legendary necklace. The second story is about Rocannon, who discovers the planet is under attack and without access to technology tries to save it. This involves an epic quest to lands unknown to meet the oldest species on the planet and find the enemy base.
When I read the book I just enjoyed it for what it is. I love Le Guin’s style and wasn’t disappointed here. The mix of a high-technology alien species and a pretty basis planet is wonderful, and teaches both species new things. Afterwards I read the reviews on LibraryThing and the page about the book on Wikipedia. There they linked the story to literary history by mentioning that the upper class species resembles Norse Gods (blonde hair, warrior culture), and to heroic fantasy (a quest with species that resemble dwarves, elves and humans). I agree with that, but still the story is different enough from standard fantasy to be very enjoyable. Another fun fact I learned was that this book has the first mention of an “ansible” (faster than light communication), something which has been in use in science fiction by various writers ever since, not just by Le Guin. Four out of five stars.