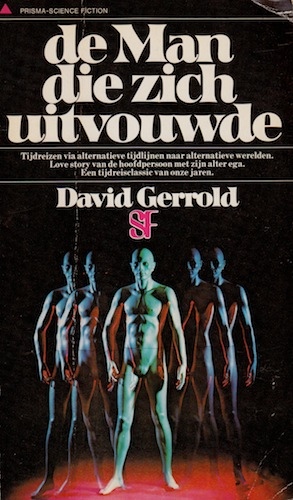 I picked this book up purely because it is a 70s sci-fi novel, and I love those, most of the time. Later on I read some comments online that this is a pretty weird book with too much weird sex. And I can’t say I really disagree with this.
It is the story of Danny, who receives a time-travelling belt from his old uncle who died of old age. He hops through time and slightly alternate universes, mostly spending time with himself and a version of himself. This makes it pretty hard to keep track of the story, as he is constantly travelling backwards and forwards to tell himself things, to party with himself, to help himself. Even for him it gets hard to keep apart sometimes. Like some other reviewers on LibraryThing have said, there is some pretty weird sex in this book (gay sex with himself, threesomes with himselfs, sex with a female version of himself….) and I am not quite sure this was necessary for the book, but whatever. It is an interesting view on time/dimension travelling, and an ok read. Three out of five stars.