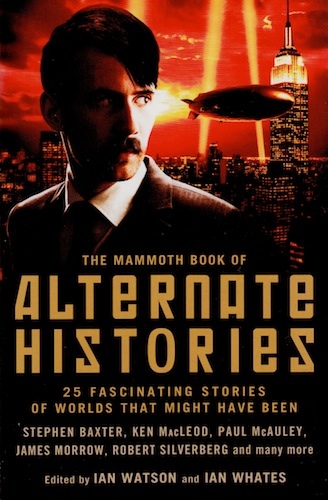 I’ve always been fascinated by alternative history stories, the ‘what if’s’ of history. What if Churchill had been hit by a car before the Second World War? What if Roosevelt hadn’t had polio, what if Henry IV hadn’t gone to Canossa? So I couldn’t help but pick up this collection of stories and novella’s of Alternate Histories.
The collection was pretty good. There were some good stories in here, like one about the Roman Empire lasting to the year two thousand (having a serious effect by cancelling out the industrial revolution it seems), or the one about the crew of the Enola Gay dying before dropping the bomb and the replacement bomber refusing to drop the bomb on Hiroshima.
However, reading alternate history requires knowledge about the pivotal change in the story. If I don’t know the effects of the bomb on Hiroshima, or the shooting of Franz Ferdinand, it isn’t interesting at all from an alternate history point of view to read about a change in this history. Then it is just a story, pretty nice, but it loses its power. This was a problem for me in several of the stories. It was still a fun collection to read, with some nice classics. Four out of five stars.