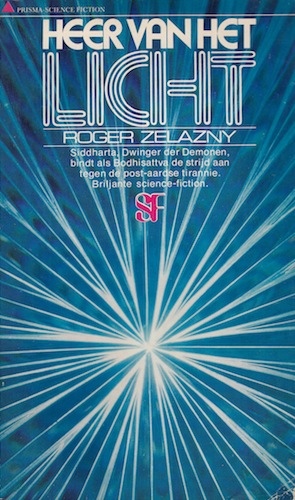 I bought this book because it is one of the Hugo winners, and I am (still) on a mission to read all winners. Sometimes you come across a book that is just outside of what you would normally read, and Lord of Light is one of those books. The reason I would never pick this up without its Hugo winner status is that it is about (earth, existing) religion. But then again, it is also not really about religion, so I am happy I read it.
The story is about (space?) travelers that have colonized a world much like our own, hoarding and refining their technology and structuring their organization like a pantheon of (Hindu) gods. Existing species are classified as demons, the offspring of the original (godlike) colonists are the subjects. The main character is Sam, or Buddha, who used to be one of the gods but is now fighting against them. There are several other fallen gods that are in the war with him, both on his side and not. The book cover an undefined span of time, and jumps from story to story covering the fights between the gods and Sam.
Because of the jumps in time and the reincarnations (transfer of the soul into a new body electronically) I found it very hard to follow the story and to get into it. I get that this is based on the legends/myths/stories around Buddha, but as I don’t know these stories well, I didn’t have that connection as a guideline either. For that reason it took me a while to get into the book. But after a while I did get hooked, and I enjoyed reading the stories for what they were. I would have liked to know more about the colonists/gods, their technology and their back story, so the style of the book as a myth didn’t really appeal to me. Still, three out of five stars.