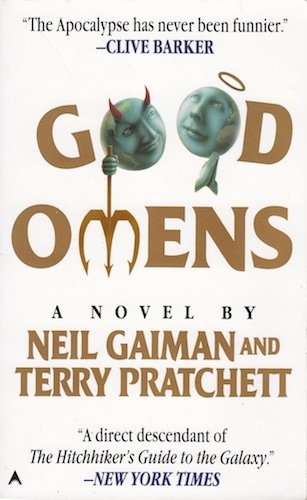 I’m still in a bit of a reading-funk, so when I found Good Omens by both Neil Gaiman and Terry Pratchett, two authors whose work I really like, I couldn’t wait to start reading it. And I wasn’t disappointed. It is the story of the apocalypse, told from the view-point of an angel and a demon who have lived on earth for a long time, and have become friends. They also kind of like us humans, saying they are capable of greater good and evil without help of heaven and hell than would ever be possible with help. Anyway, the apocalypse is upon us, complete with Antichrist. The Antichrist (the son of the Devil) has been placed with a family, and when he turns eleven… all hell will break loose, quite literally. But, what if he is misplaced? And his upbringing was quite normal (English middle-class)? And why should there even be an apocalypse?
The book is absurd, funny, fast-moving and just all in all fun. If you like absurd humor, if you like Gaiman or Pratchett, if you like not taking religion as seriously as some, then this is the book for you. Four out of five stars.