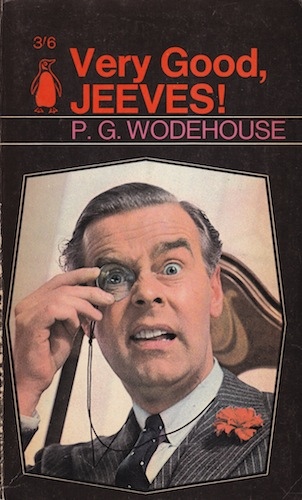 Recently H. and I have watched the fantastic Hugh Laurie and Stephen Fry series Jeeves and Wooster, based on the books by P. G. Wodehouse. The books had been recommended to me years ago by a friend, but even though I picked up a whole pile of them for free, I hadn’t read any yet. But now I couldn’t resist, and I just had to read a Jeeves and Wooster book. Luckily for me, the only English Wodehouse I have is the first one (in my collection, not in the series). The rest of the books are in Dutch, and miss some of that British charm, I’m sure. However, this first book was in English (glorious English) and so much fun.
The book itself has several short stories dealing with the adventures of Wooster and Jeeves’ inevitable rescue. I was pleasantly surprised that the dialogue in the series comes so close to the stories in the book. The stories are all told from Bertie’s standpoint, which makes them even more fun to read. Some of the stories in this book have also been featured in episodes of the TV show, so they weren’t new to me. With regards to the others, they were very similar, and fun to read. Four out of five stars.