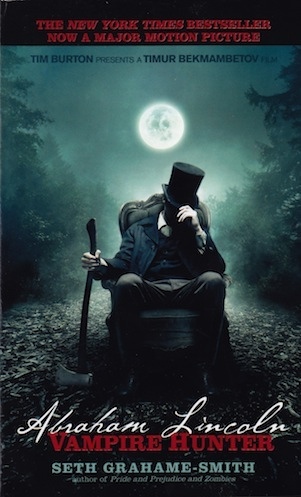 A few years ago a new genre arrived on the book scene, where vampires, zombies and other supernatural monsters were merged into classic stories like Pride and Prejudice. And then a mix of real history, and big historical characters and the supernatural was the logical next step. And that’s how I came to read Queen Victoria: Demon Hunter, and why I have recently picked up Abraham Lincoln: Vampire Hunter.
This is a (short) biography of Abraham Lincoln, mixing his real life story and family and friends into a story of vampires playing a big role in the history of America as a new country.The story starts with the writer, Seth Grahame-Smith, meeting a stranger who gives him a set of diaries. Those diaries turn out to be written by Abraham Lincoln. It starts in his youth, when he is greatly affected by the death of his mother and the inaction of his father. He meets a vampire, and when killing his first one he receives help that makes it possible for him to train and become the best vampire hunter of the new United States. He uncovers the hidden history of the vampire’s influence in the country, and is determined to fight for humanity.
I bought this book because I needed some entertainment that didn’t need too much thinking, and this book gave me exactly what I needed. If you’ve read books in this genre before, you know the set-up. It isn’t a masterpiece, it is just fun. And it has made me want to read more about Lincoln (the real one). The last chapter was a nice addition and opens the door for more (I hope!). Four out of five stars.