The Prisoner of Zenda by Anthony Hope 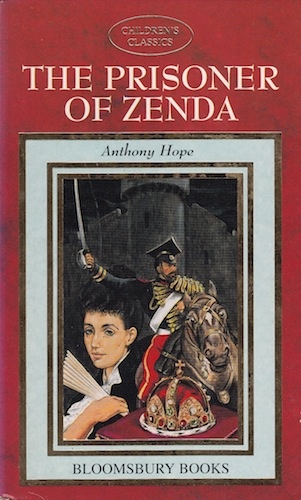 A couple of years ago Penguin released a (beautiful) series of Classic Boys’ Adventures. I got a few of the books (Tarzan, She, The Lost World) before they disappeared from the bookstores again. Last week I found one of the books from the series I didn’t have yet, in a different version, ‘The Prisoner of Zenda’.
Rudolf Rassendyll is a well-to-do English gentleman who doesn’t want to work or do anything. In his family he is the odd one out, with red hair, because of an affair one of his ancestors had with a royal from Ruritania. He decides to find out his heritage and travels in secret to Ruritania, where it turns out he looks exactly like the king who will be crowned the day after he arrives. His similarity to the king leads to a big plot by the king’s evil brother, Black Michael. The book covers a big adventure to save Ruritania from Black Michael, all while falling in love, fighting with swords and guns.
The book is a true adventure, a bit more geared towards boys than the other books in the Penguin series, and because of that a bit less interesting for me. But it was an enjoyable adventure to read, so three out of five stars.