The System of the World by Neal Stephenson 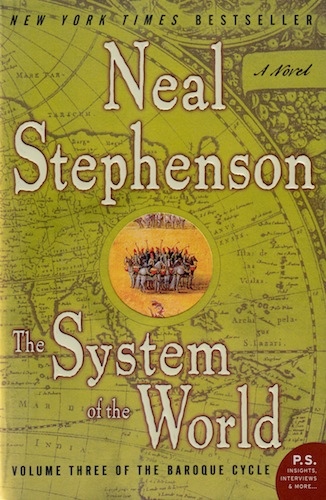 After reading “The Confusion” last week I moved right on to the last book in the “The Baroque” cycle, “The System of The World”. This is the book where it all comes together, the long and winding stories of Daniel Waterhouse, Isaac Newton, Jack Shaftoe and Eliza. The main character in this book is Daniel, who has been called back to England from America by Sophia Charlotte of Hanover. Jack is a coiner making false coins out of special gold, Newton is Master of the Mint but also an Alchemist. Queen Anne wants her successor to be Catholic, the Whigs want it to be George of the House of Hanover, a protestant.
The book is, as those before it, very detailed, very dense, with many characters, story-lines and politics. There is really no way to write a summary of suck a complex story. Another reason for no summary is that anything said about this book would spoil the other two books. I loved this book, as I loved the rest of the series. If you liked the other two (which you need to read to get this book), you’ll like this one. If not, you won’t. For me this is five out of five stars.