The Confusion by Neal Stephenson 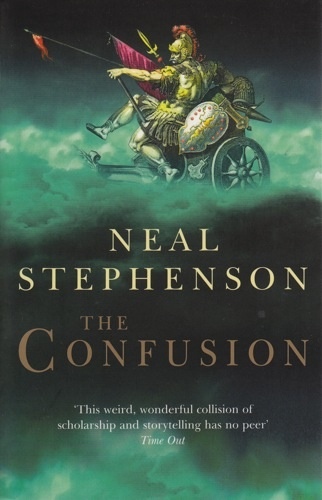 Two years ago I read Quicksilver by Neal Stephenson, the first of three books (in my editions) of The Baroque cycle. It took me two weeks, I loved it, but somehow I didn’t have the courage to pick up part two, The Confusion, even though I bought it right after finishing the first book. With my resolution to read more ‘big’ books this year, I just jumped in, and I am so glad I did.
It is hard to give a summary of this book, because it is so dense, and has so much, and every detail seems to be important and comes back later on to influence somebody else on the other side of the world. What I can say is that it is the end of the seventeenth century, and that the book focusses on Eliza and Jack, only mentioning Daniel in passing. Jack is a slave on a Corsairs ship, and Eliza has lost everything and is in trouble in French for being a suspected English spy for William of Orange. In my edition both their books are woven into each other, which makes for great reading and a fast-moving story.
What I love is how historical events (the war between England and France dealing with the succession and who should be on the English and later Spanish thrones) and the worldwide adventures. I don’t want to spoil too much, but both Jack and Eliza travel around, showing us, the readers, a lot of the world in the seventeenth/eighteenth century. I also love how they both weave intricate plots that take years and years to come to fruition. They are unclear in the beginning, but then, when it happens, I really appreciated the brilliance that is Neal Stephenson. You need to invest in this book (time, energy) but it is so worth it. Five out of five stars.