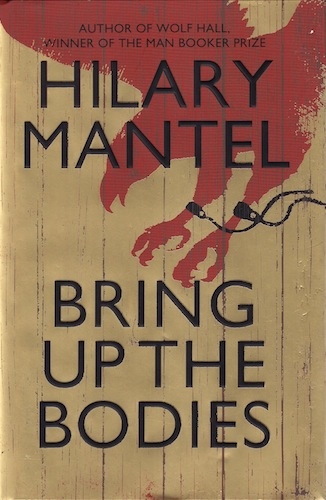 In 2009 I, like many others, read ‘Wolf Hall’ by Hillary Mantel. ‘Wolf Hall’ is the story of Thomas Cromwell as seen from his point of view, when he is making the marriage of King Henry VIII to Anne Boleyn possible. This book, ‘Bring up the Bodies’, is the sequel, when Henry is getting tired of Anne and wants to marry Jane Seymour.
The story is told from Thomas Cromwell’s side, and unlike most other books and sources, he seems a good man, who just does what he is paid for, and what he feels is necessary for the country. In the book many famous historical figures, like Henry VIII, Anne Boleyn, Thomas Cranmer, Jane Seymour and Thomas Howard. The story itself isn’t much of a surprise, what makes this book special is the writing. There was much complaint about the writing in ‘Wolf Hall’, where it was sometimes difficult to see who was saying what and the story just rambled a long. I feel this is much improved in this book, although I can’t say I was that bothered with it in ‘Wolf Hall’. Now sometimes extra emphasis is placed on who is saying something (“he, Thomas Cromwell”). The conversations are still fast flowing, but that is what makes the book fun. When the gentlemen are scheming on how to deal with political enemies and friends and how to survive themselves, I just love this book. The best part was when I read the sentence that explains the title, I just feel that was brilliant, because while it is only a small scene at the ending of the story, it does describe the whole thing in a few words. If you liked Wolf Hall, you’ll like this, if you hated the writing in Wolf Hall, maybe try this one. Five out of five stars.