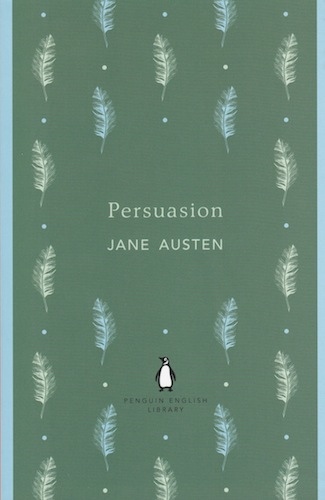 Besides buying a lot of (second-hand) books, I also enter a lot of competitions for books I am interested in. A couple of weeks ago I won a wonderful publication of Jane Austen’s Persuasion from Penguin’s new Penguin English Library series/editions. It is a simple edition, with a short essay in the back but no footnotes.
In short, Persuasion is the story of Anne Elliot who has given up an engagement to Frederick Wentworth because he is too low and poor for her. Seven years later, he is a wealthy Captain in the navy, but hurt by Anne before, he hardly gives her the time of day. Anne still loves him, and cannot help but hope to win him back. All this takes place in England in the early nineteenth century, in big houses, snooty families, Bath, as we are used to with Jane Austen.
What can I say to review this novel that hasn’t been said before? If you like Jane Austen, as I do, and you can get into the language and mannerisms of the day, you’ll like this book. It is short and not with as much humor as Pride and Prejudice, but still a fun read. The ending is predictable, and not all story-lines are ended that neatly, but that doesn’t matter in a book of nearly 200 years old. Four out of five stars.