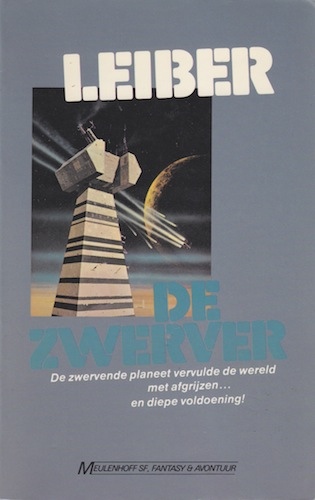 In my effort to collect and read all Hugo award-winning novels the latest book I read was The Wanderer/Zwerver by Fritz Lieber. The book was first published in 1964, my edition is the Dutch translation published in 1987.
It is the future, and both the US and Russia have a permanent base on the moon. The wife of one of the astronauts on the moon and his best friend are watching the total lunar eclipse when suddenly a new planet appears in the sky out of nowhere. The planet, and its gravity cause disaster on the earth (earthquakes, volcanic eruptions, flooding) and on the moon. The book is the story of many people on earth and on the moon dealing with the appearance of the planet and the disasters surrounding it. It is a mix of a dystopian world (every man is fending for himself) and first contact (who are the aliens on that planet? why are they there?).
The book was an entertaining read. Yeah, some of the events are pretty coincidental, and some are far-fetched. Not all characters (most actually) were necessary, and I would have enjoyed reading more about the aliens and their history. But especially the fact that I have just read Star Maker, and the book starts with a quote from that book, and borrows from the world building in that story it connected for me. It gave me an extra episode in the Star Maker world, a focus on one small event that could have happened in that universe. Entertaining, four out of five stars.