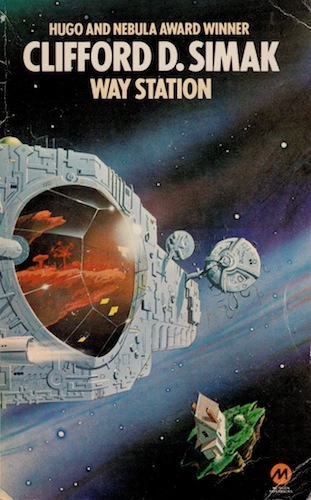 I picked up Way Station by Clifford D. Simak because it won a Hugo and a Nebula award, which I take for a good sign of good science fiction. I am trying to collect and read all Hugo winners to introduce myself to (older Science Fiction). With this book, I wasn’t disappointed, what a good book.
The Way Station is a house on earth, in rural America. In it lives Enoch Wallace, who appears to be immortal. This draws the interest of the United States government. This is how we are introduced to Enoch. The story has several story-lines, one of which is the government watching Wallace. Another is Wallace in his Way Station, a stop along the intergalactic travel highway. He meets all kinds of aliens, gets all kinds of gifts, but cannot tell anybody because the Earth is not part of the galactic federation. Meanwhile Earth is moving towards another (nuclear war). And close by lives a backward family with a mute girl for a daughter, who Wallace is charmed by and meets in the woods a lot. In the end all the story lines come together in a great climax that resolves everything, and makes Wallace choose between Earth, and the galaxy. Where does he belong?
Even though the book is really short compared to the sci-fi published today (189 pages in my 1976 edition), it manages to pack this all in without feeling rushed. Also, the story itself doesn’t feel that dated. Many ideas come back in later books, movies and TV shows, but still feel new. Great stuff, highly recommended, four out of five stars.