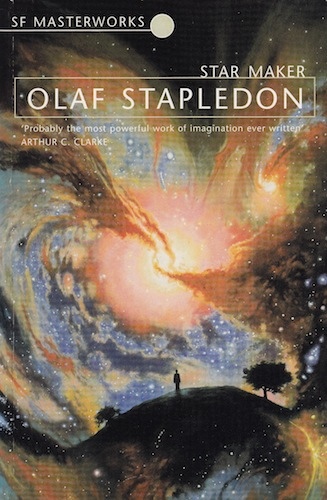 I had heard of Olaf Stapledon before, I even have another book by him, but I had never read anything by him before. Last weekend I found an SF Masterworks edition of Star Maker. I always buy SF Masterworks books (if I don’t already have them, of course), because I am sure they must be pretty good or influential to be in that series. And as before, I wasn’t disappointed.
This is not your average science fiction novel. I am not even sure it falls in that genre, it could also be philosophical, almost religious literature. The story is told by a man, who, in the late 1930s, sits outside his house in England, and then starts on a (mental) journey through time and space. He travels (no ship, inventions, crew or anything, just his mind) through the galaxy and along the way he grows. He lives a while in the head of an alien (Other Human), and then travels mentally further along. Along his journey he grows and is joined by other mental travelers from other planets and periods. Together they (as one unit) discover how aliens/creatures/humans evolve and survive. They discover the same types of crises in all societies, and when a society can grow beyond it, the species can evolve. The main movement is towards mental peace, togetherness and unity. First between countries, then planets, galaxies, the universe. The last stage is towards the Star Maker, the unknown creator.
Like I said, the book is pretty philosophical, and the language used takes some getting used to. It is pretty clear which way the story is going, what Stapledon is thinking, but that is ok. Realizing this book was written in 1937, just before World War II makes some references to Earth even more real. This is simply one amazing book, an absolute must read for so many reasons. Four out of five stars.