This Immortal by Roger Zelazny 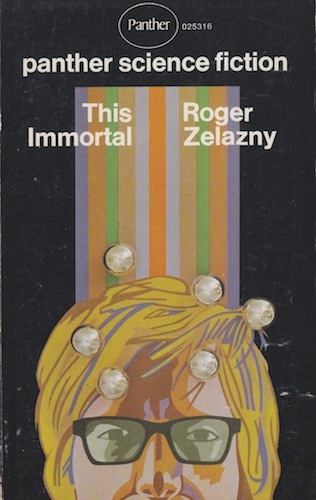 This is a Hugo winning novel by Roger Zelazny, formerly serialized and also known as “…and call me Conrad”. The setting is a future Earth, devastated by nuclear war. An alien race, known as the Vegans, offered shelter to humankind when it needed it, and as a result humans are their workforce, and the Vegans own the Earth for leisure purposes. On the Earth itself a mere 4 million humans remain, as well as various mutated lifeforms due to all the radiation. Conrad is the narrator, a man with a long and indeterminate past who is the Commissioner dealing with Art and History of Earth. He is commanded to take a famous Vegan on a tour of Earth, because the Vegan is writing a book. Reluctantly Conrad does so, taking him to Egypt and to Greece (where Conrad is from). Along the way everybody in the tour party suspects that the Vegan is planning something for the Earth, but if this is good or bad for humanity remains unclear and he is unwilling to show.
This book has many elements, now that I am writing this review, I think back and remember the many things going on. It has a perilous journey, ancient mythology, humankind’s fight for survival, aliens, love, intrigue. And all that in a mere 187 pages (my 1968 Panther edition). I could not put the book down, and wasn’t even that disappointed with the quick ending and all the questions I still had. If the book had been written today, I bet it would have been 500+ pages, but this was short and sweet and leaves something to be imagined. Four out of five stars.