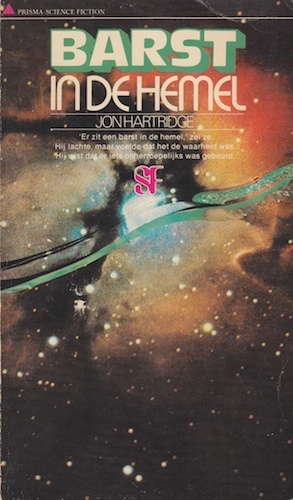 Most of my old science fiction books come from second-hand (charity) shops. This means I don’t pay much (a lot less than in a second-hand bookshop), and I find things that haven’t been in print in years. Some known works, but the book I just read seems to have been forgotten. You can find second-hand copies, but there aren’t many reviews (two ratings on Goodreads, none on Librarything). It is Barst in de hemel/Earthjacket by Jon Hartridge.
It is the story of Phillips, a Sleeper. He lives in a (future?) world of Texecs and Sleepers. The Texecs are the elite, who live with 100% oxygen in a protected city. The Sleepers are kept in the background, and get a lot less oxygen. They are also fed a drug to make them sleep 16 hours or more a day, and given happy vivid dreams to keep them happy. But Phillips experiences a nightmare, and escapes. The Texecs in his city decide that he has potential, and start training him to become a Texec himself. With more oxygen, better food and drink and education, Phillips soon starts to realize what the place of the Sleepers really is. During the story he tries his best to improve the place of the Sleepers, which is made difficult not only by the Texecs, but also of his ignorance of the Texec society. Slowly he learns, he acts, and tries his best.
When reading older science fiction stories (this one is from 1970) it is hard to review them based on the originality of the ideas. I have seen all the ideas (secluded cities, sleeping people, transportation through tubes, future earth) before in other books and movies. When reading this book I was constantly reminded of these other stories, but that doesn’t mean that this story disappoints. It all pulls together well. The only thing I didn’t like were the flash-forwards (“I am glad I didn’t know then how evil he was”). I like to find out these things for myself, and be surprised by them. The ending was a bit open, but optimistic. A very nice find and a good read. Four out of five stars.