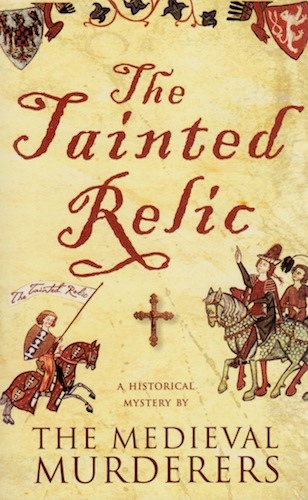 The Medieval Murderers are a group of historical fiction crime writers who have banded together to talk about their work, and later write books. This book is written by Bernard Knight (with his character of Crowner John in the 12th century), Ian Morson (with his character of William Falconer in 13th century Oxford), Michael Jecks (with his character of Sir Baldwin Furnshill in 14th century Exeter), Susanna Gregory (with her characters of Michael and Bartholomew in 14th century Cambridge) and Philip Gooden (with his character of Nick Revell in 16th century London).
The stories of all these writers are tied together by one common theme, the tainted relic. The relic in this story is a piece of the true cross, in a glass vial in a wooden box. In the 12th century a knight is handed the relic in Jerusalem during the First Crusade. It is a cursed relic, meaning that anyone who touches the piece and lets it out of his possession dies. This leads to interesting cases for all investigators through the ages.
The writing styles of all writers can be pretty different (changing point of view, third person or first person, main investigator or friend), and I liked some more than others. The same goes for the time period, locale, and people in the story. The only two writers I have read outside of The Medieval Murderers’ books are Susanna Gregory and Michael Jecks. The other three appeal a bit less to me because of that, because I don’t know more about the characters and they don’t have room to give more of a back story. The stories all flowed together really well, and all stayed true to the main story line. I liked the epilogue in our time, to pull the story out of the middle ages/Elizabethan times and show that it still has power, even though we don’t know it. All in all three out of five stars.