The Colour of Magic by Terry Pratchett 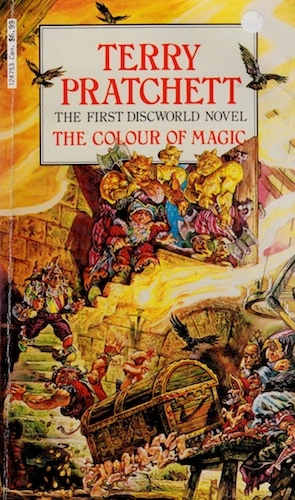 Many years ago I tried my first Discworld novel, Monstrous Regiment. I didn’t finish it, I just couldn’t get into it. But so many people seem to love this series, I felt I had to give it another chance. So, I decided to leave all the flowcharts on how to get started in this series for what they were, and just start at the beginning, with the first book published in the series. This time I was not disappointed, in fact I think I am hooked!
This is the story of the wizard (of sorts) Rincewind and the tourist Twoflower who get involved in all kinds of adventures on the world of Discworld. Discworld is a disc that is perched on top of four elephants who stand on a turtle who is travelling through space. Magic is alive and well on the island, as are all kinds of strange things, such as walking travelling boxes.
It is hard to write a short summary of this book where so much happens, and the magic of the story is in the humor, both of the world building and of the events that happen to mainly Rincewind. I loved the references to our world, like the picture making box that Twoflowers has, and the dimensional crossover. I am now truly drawn into this series, and really want to pick up the second books soon, and read them all in publishing order. Four out of five stars.