The Ringworld Throne by Larry Niven 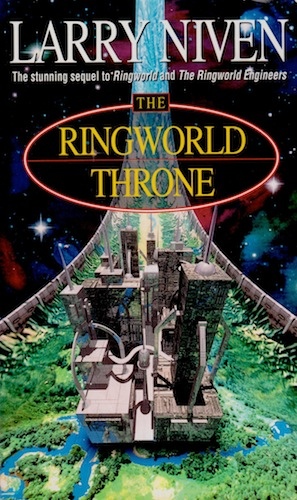 This is the third book in the Ringworld series, taking place in the universe that Niven has created, where humans and humanoids are descendants from the Pak protectors. This book focusses on the protectors on the Ringworld, protectors of and from several different races. It is several years after the events in the Ringworld Engineers. Louis Wu is travelling the Ringworld alone, while some of the Ringworlders that have appeared before are fighting an infestation of vampires. Louis returns to the Hindmost and his ship, is joined by Acolyte, the son of Chmeee, and is turned into a slave by a vampire-protector. In the end the main question of the book is: “Who is the best protector for the whole of the Ringworld, all the species together?”.
I don’t know if it was my mood while reading, or if it was the book itself. I am guessing a bit of both, but the book was pretty confusing to me. I still don’t know what the main vampire infestation has to do with the story of the protectors. I couldn’t follow half of the things that were happening with Louis, the protectors, the old protectors, Teela, the people from Earth, Ringworld. I felt it was all too much, all was stuffed in this book to give the reader the feeling that he/she is back in the world of Ringworld. It was all a bit disappointing, so three out of five stars from me.