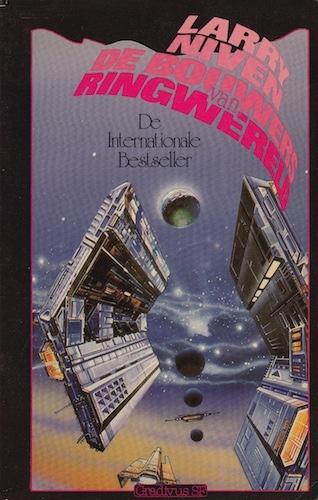 This is the sequel to Ringworld, written ten years later, after Larry Niven had corresponded with many people about the physical possibilities of Ringworld. The story takes place twenty-three years after the first.
Louis Wu is addicted to the current, a pleasurable impulse he receives through an implant in his neck. And then one day he is taken by a puppeteer who appears in his apartment out of nowhere. SpeakertoAnimals has also been kidnapped (although he is now called Chmeee). Together they are stuck on a ship with the Hindmost, the partner of Nessus. He has been dethroned, and has a risky plan to regain power, by going to the Ringworld and finding valuable stuff for the puppeteers. He has kidnapped Louis and Chmeee to help him. But when they arrive at the Ringworld, twenty-three years after they have left, it is off-centre, threatening to crash into the sun and kill the whole system. Can they do something about it? Even with the Hindmost and his own goals? And can they figure out more about the history of the Ringworld? And will they see Teela Brown again?
It was nice to return to the world of Ringworld again, especially now that most parts about the physics and history seemed better thought out. I was surprised that this not only a sequel to the first Ringworld, but you also should have read Niven’s other book, ‘Protector’. I have that book but have not read it yet, and am afraid that this book spoiled it a bit for me.
The rest of this book was good, a fun read, with new species to discover, a new mystery to solve. The ending did seem a bit rushed, as if it had to fit in the final fifty pages, but it still makes me want to read more about the Ringworld and by Larry Niven. Four out of five stars.