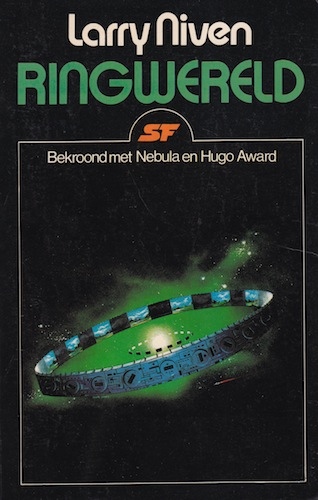 This is one of the classics of science fiction, a winner of both the Hugo and the Nebula awards, so a must-read for me. And again, I was not disappointed.
It is the story of the human Louis Wu, who, together with the puppeteer (an alien race with two heads and fur, an naturally pretty scared and worried) Nessus, the Kzint (another alien race, looking like a big orange cat an naturally war-like) SpeakertoAnimals, and the lucky human Teena, travels to the Ringworld. This is a strange, made place, a ring around a star to live on, a lot larger than earth or any other know planet. But the exploration goes wrong, and soon they are trying to find a way back home, while discovering Ringworld and its history.
This was a great read for me, reading like truly one of the classics of science fiction. It had some of the must have elements, the future, the future of humans, aliens, alien world, space travel and speculation. A nice, enjoyable book, which makes me want to dive into the second one right away. Four out of five stars.