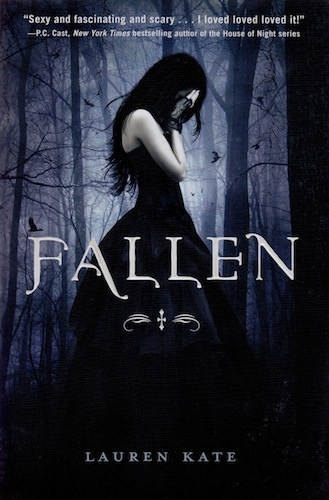 In search of an easy read I picked up Fallen, which I had bought with its sequel on sale a couple of weeks ago. Fallen is a Young Adult novel in the supernatural genre that is so popular these days.
Fallen is about a seventeen-year-old girl, Luce, who is sent to reform school after her would-be boyfriend spontaneously combusted. Luce has been seeing Shadows all her life, darkness that nobody else could see, and has basically been labelled mentally ill because of it. The new school she is at is very tough, both because of the kids, the continuous surveillance, the gloomy, marshy southern environment and the rundown prison-like buildings. And in the midst of all this is David, a boy who wants nothing to do with her, going so far as flipping her off and sending her away. But she is attracted to him, very much, and she can’t explain the feeling she has that they’ve met before. Besides David, there is also Cam, a nice boy who does want to date her, but Luce cannot get David out of her head. Soon she discovers there is more between Heaven and Earth, and why she and David are both doomed and meant to be together. Forever.
The book follows the YA-for-girls formula pretty well. Luce is a lonely, sad girl, and both David and Cam are perfect. Their relationships are pretty unhealthy, both boys behaving pretty badly towards Luce, and she behaves like a naive young girl.
But, if you can put that, and the not-so-perfect writing aside, it is an enjoyable story for YA fans. It does feel like a part one, not explaining too much about the supernatural, but that is the way these series work. Three out of five stars.