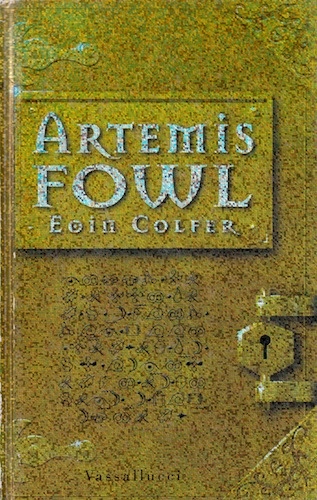 Besides Harry Potter and Perry Jackson, one of the other supernatural adventures written for kids/young adults that gained fame these past few years is Artemis Fowl. But in this story, the title character is not the hero, but the villain.
Artemis is a twelve-year-old boy, heir to a long, long line of bad guys. Now that his father is disappeared, he has taken over, and he needs a lot of cash to pay for the upkeep of his ancestral home in Ireland. And he has figured out a way to this is to steal the Book from an elf and use it to think of a master plan. Indeed, an elf. This is a world where elves were here long before we were, and are now underground, hiding from us and daylight. Together with goblins, trolls, and other mythical creatures. And Artemis kidnaps an elf, Holly, an agent for the elfBI. The rest of the book covers the plight of the elves to keep themselves hidden from humanity and to free Holly from Artemis.
Like the other young adult adventures I have read this book is very fast paced and filled with action. The mythology of the elves is pretty good, even though not many details are revealed, and it is pretty nice to have an evil main character. I am looking forward to the other parts of this series. Four out of five stars.