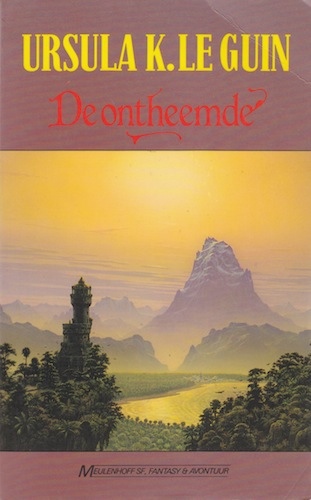 This is one of the absolute must-reads of Science Fiction, a book that has won many awards (Hugo, Locus, Nebula) and is on many lists (one of which is the 1001 list). So, when I found it in a second-hand bookshop, I had to have it, and when I was looking for a good book to read which wouldn’t be too much of a gamble, this is the book I picked to read. I can’t say I don’t regret it…
One thing the reader must know is that while this is science fiction in the sense that it takes place on a different planet in a different galaxy, where there are spaceships and the Hain and Terra’s, it isn’t really that science-fictiony. It is more of an anthropological book, about social interaction, politics, freedom and others (other people, ‘them’). There are two planets, Anarres and Urras, Anarres being the moon of Urras. Urras is a planet divided into nations, all with their own political systems and strife between them. Anarres was settled 150 years ago by anarchists, who wanted to unleash a revolution on Urras and were given the moon to settle down on with their own political system. The people on Anarres have no government, no property and total freedom. Everybody works for everybody, and everybody shares everything. Even love is free, marriage doesn’t exist and partnerships are rare.
On this world Shevek lives, a physicist who is discovering theories about linear and circular time. Slowly he discovers how free he really is in the anarchistic culture of Anarres and he sets out to do something about it, landing himself on Urras. Urras is very different from where he grew up, and slowly he discovers what that means to him and to what he has set out to do.
I really struggled with this book, taking longer to read through it than I normally would. Part of this may have been my frame of mind at the moment, where I was really craving a simple book I could just enjoy without too much though. The Dispossessed didn’t really offer me that. Long passages are filled with elaborations on the political (or non-political) structure on Anarres and what that means for the humans living there, both practically and emotionally. Other passages where about the scientific discovery Shevek was about to make. For me this was all a bit too much. I get what Le Guin tried to do (and from reading other reviews, succeeded to do), but I guess I was not ready for it, or are a bit too cynical for it now. I give this book three out of five stars, it not being the best Le Guin I have read.