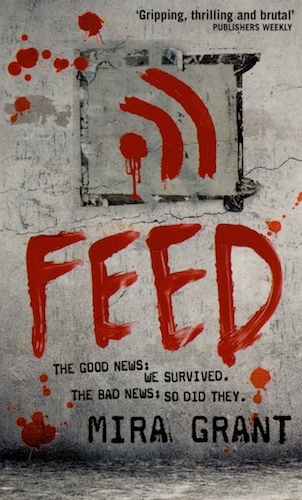 The title of this book is pretty smart, taking advantage of the modern double meaning of the word “Feed”. In this book it both refers to an RSS feed from a blog, as well as eating, because the book is about a world where being eaten by zombies is a real threat and news published by blogs is very important.
It is 2040, and the world is overrun by zombies, reanimated dead people who want nothing more than to eat flesh and infect living humans. The zombies arrived when two viruses, Kellis (to heal the common cold) and Amberlee (to heal cancer) joined to create this monstrosity. Every human is infected, and as soon as they die, they come back as zombies. All other mammals over 40 pounds suffer the same fate, and are therefore dangerous for humans. Humanity has learned to live with this, using security measures as frequent blood testing, no gathering in big crowds, armament, and different building styles. When the deadly effects of the combination of the two viruses became clear, it were the bloggers who reported on it first, when the print media were still downplaying the issue as rumors or hoaxes. This has heightened the respect for news bloggers in this dystopian future.
Georgia and Shaun Mason, together with Buffy are a team of reporters for one of those blogs. Georgia is a newsie, who reports facts, Shaun is an Irwin who reports on adventures he has when he goes into zombie-territories, and Buffy is a fictional, who writes stories and poems about life. Together they are picked as the first blog team to follow a presidential candidate, Senator Ryman, who is in the race to become the Republican nominee. Usually the candidates only have traditional press in their press team, but Ryman is one of the younger politicians and gives the three bloggers full access. While following the senator around they uncover a secret plot and live through heartbreaking adventures while they learn more about zombies and politics.
I don’t know why, but I love (reading about) zombies. There is just something about the threat of mindless killers who are slow, but persistent, hard to kill, and great in numbers. This book follows the zombie-lore pretty closely, while adding a pretty realistic explanation of how they came to be. The world described in ‘Feed’ is a world that has recovered from the shock and is now moving on, trying to live life as usual, including politics and religion. It is the politics I wasn’t to keen on in this book. It is probably the frame of mind I have now, but I am pretty annoyed with politics in real life, so that feeling carried over when I was reading the book. But then again, it did offer intrigue and adventure, and it did fit the story. I felt sad reading the book, knowing what was coming (it was pretty clear from about half way through the book), but it was good. I really liked this take on the zombie-dystopian future of our world. Four out of five stars.