SF Omnibus by Isaac Asimov and Robert A. Heinlein and Max Ehrlich and Uncredited 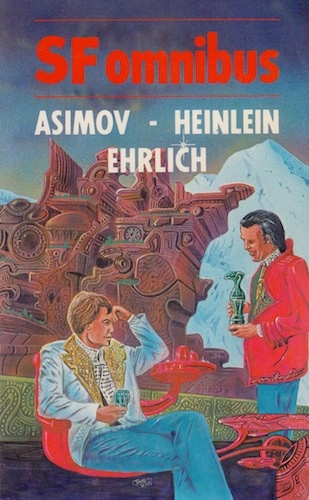 This book contains three science fiction novella’s/books: The Big Eye by Max Ehrlich, The Man Who Sold the Moon by Robert Heinlein and Pebble in the Sky by Isaac Asimov. Like all collections, this was a mixed bag.
The first and longest story was The Big Eye. The story started out with many, many pages detailing the Cold War that has nearly become a real war. The threats are great, and many big cities like New York and Washington are nearly empty, everybody having fled in-land. There is a suspicion that the Russians have a secret weapon, because the US is plagued by earthquakes and other strange event in nature in places where they should not occur. The president is almost ready to press the red button when he is stopped by a phone call from somewhere you least expect it, an astronomical observatory. They reveal that a planet is rapidly approaching earth, and a collision is unavoidable. The rest of the story details how humankind deals with the knowledge of the time and day of its destruction.
The story was alright. There was too much emphasis on the Cold War, but I understand this, given the date the story was written. After that has passed the story is actually pretty interesting, picturing the reaction of humankind to extinction and total destruction.
The second story was The Man Who Sold the Moon, about a shrewd businessman living in a future version of earth, a time when cars fly and rockets are used for long distance rapid flights across the earth. The businessman wants to go to the moon, and devises a business-plan to invent the spacecraft needed and to exploit this to its full potential.
It is interesting to read how the race to the moon could have gone, if it had been in the hands of private investors instead of government agencies. The story turns tragic in the end, but for me, this was the perfect completion of a well thought out version of events.
The last story was the best, Pebble in the Sky. The story takes place on earth in the Foundation universe. A man is walking along a street in Chicago in the now, and due to a freak radioactive accident, is thrown far into the future. Earth is now a backwater planet, hated and hating all other planets where humankind has spread and started the Empire. The man gets caught up in a plot by Earthmen and he has to choose who he belongs to, the Earthmen or the humans in space.
This was a classic Asimov for me. I loved being back in the Foundation universe, and seeing references to things I know from the other books. There was a bit too much of a coincidence in this story of people meeting at just the right time, but Asimov does a nice job of putting these coincidences to good use.
All in all I give the collection four out of five stars.