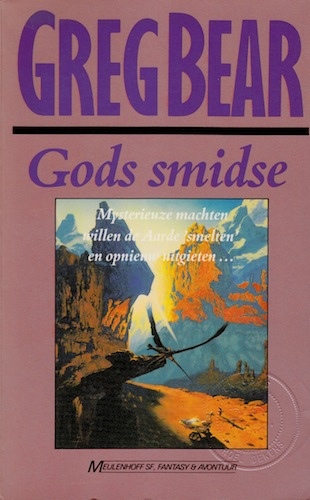 When I was pretty young (11 or 12), I already loved reading. I asked my dad if I could read one of his books (my friend and me were kicked out of the adult section of the library, even though we had already read all the good stuff at the kids section). He gave me Songs of Earth and Power by Greg Bear, and to this day, it is still one of my favorite books. So, anytime I can get me hands on some Greg Bear, I don’t hesitate, even though most of his other stuff is more science fiction than the fantasy world of Songs. I bought Anvil of Stars a while back, so when I found the book that comes before that one, The Forge of God (Gods Smidse in Dutch) I couldn’t help myself. I bought it and immediately started it.
It is the 1990s. Aliens have come to earth, evident from the mountains that have appeared were none were before. Something has landed in Death Valley and something else in Australia. Humankind communicates with the aliens in the US, but what they tell us, actually warn us about, is pretty horrible. But the aliens in Australia tell a completely different story. Who is right? And what can we do?
The first part of the book is mostly about the discovery of the aliens in the US, and the research into them and into the story they tell. Halfway through the book humans have to start reacting to the news, and do this in various ways, trying to deal with something so huge through religion or with force. But a solution is offered to some, and the rest of the book is the conclusion of the arrival.
The start of the story was pretty slow, although it was a nice pace of discovery, and doubt about what to do. The rest of the book moved pretty fast, and I couldn’t put it down. I loved how the ending is something I have not often seen in science fiction. For me this book was pretty original, and I really liked the story, so four out five stars.