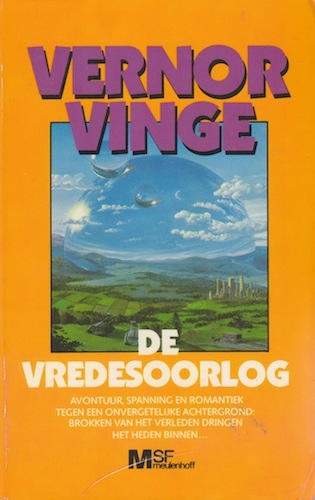 Just the title of this book is contradictory, and therefore pretty intriguing. A peace war? Yes, a peace war.
It is ‘the future’ (1997 and 2047, the book was first published in 1984), and the ‘bobble’ is invented. It is a forcefield that can encapsule something, killing it in the moment. The Peace, started by the scientists who invented the bobble, has used the bobbles to put an end to war by encapsulating all hostile, explosive elements. The population of the world is greatly diminished by biologically engineered plagues. Because of this, and their quest against war, the Peace has forbidden all biological and electronic development to prevent the rest of the world inventing a solution to the bobbles or different weapons to rekindle war. All this leads to a pretty bleak life for most humans, as the Peace is effectively a dictatorship ruling most of the world. The story starts fifty years after the first bobble appeared, with Wili, a math wiz-kid, Paul, an old inventor, and weird things happening to the bobbles. For the people living in hiding of the Peace, this might be their chance to finally offer a real fight.
This book was a Hugo nominee, and based on that I expected a pretty good story, well written with good characters. Instead I felt more like I was reading a young adult novel. There was something like romance (also promised to me by the cover of the book), which wasn’t really explored. There was adventure, a trip through the land under the threat of the Peace, but I never really believed the threat. Anytime something difficult came up, anytime the main characters were really under threat, somebody magically had the solution. Something maybe never seen in the past fifty years, and all of a sudden it is there, within less time than anybody ever needed. On top of all that, the ending was pretty confusing, and felt like a set-up for a second book. All in all, pretty disappointing, three out of five stars.