The Windup Girl by Paolo Bacigalupi 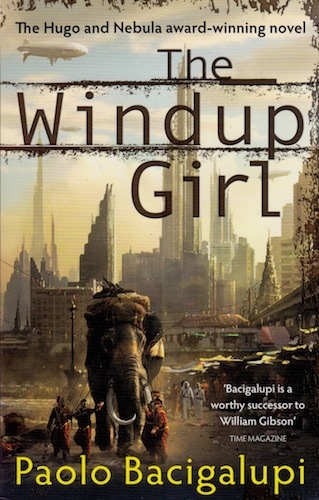 In my quest to read all Hugo winners, I am also picking up the newest winners as soon as I can. Sometimes this leads to me buying books I am almost certain I won’t like, based on the summary on the back. I buy them anyway because so many reader can’t be wrong. Luckily, with The Windup Girl by Paolo Bacigalupi, all the other reviewers and Hugo jury was write, and my first reaction was wrong.
It is the future, and genetic manipulation by corporations has led to wide-spread extinction of normal food and animals. Corporations offer crops that are resistant to diseases developed and spread by them for only a few generations. This has led to war, starvation, and a fight for genetic material. The story takes place in Bangkok. Thailand is one of the few countries resisting the corporations, with a ministry of Environment and one of Trade keeping an eye, a strict eye, on things. In this city we follow several characters: a man from one of the corporations, a general from the ministry of Environment, a Chinese refugee from Malaysia, and a Windup girl. The last is a genetically modified human, built by the Japanese to serve, but reviled by the Thai and recognizable by her choppy movements. All characters come together in the fight the Thai fight to survive, with the Windup girl being a center of it all.
Industrial, dirty cities aren’t for me, and a book taking place in one didn’t seem attractive to me at all for that reason. But I am glad I read this book anyway, because I couldn’t put it down. The story takes a bit to get going, but in the meantime Bacigalupi builds a great world. Not to live in, but well thought out, and very realistic. This could happen in our future, some of the things that have led to the world of The Windup Girl are happening here and now. That makes the book scary but also very good. In the end it is all about the fight for survival, as a person, a group, a country. A great read and highly recommended, five out of five stars.