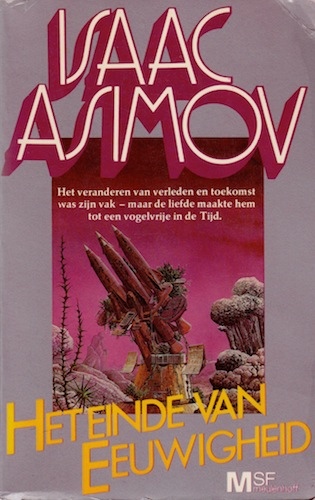 For the Worlds Without End Grand Master Reading Challenge (read 1 book each of 12 Grand Master authors in 2012) I really enjoyed reading “Het einde van eeuwigheid” (“The end of eternity”) by Isaac Asimov. The book is originally from 1955, the version I read is the 1983 Dutch translation.
The main character is Andrew Harlan, an Eternal Technician living in Eternity. Through Eternity time travel is possible, from the 27th century upward. However, after a certain point there are the Hidden Centuries, centuries they can travel to but not enter. Together with the Computers, the Technicians make small changes in the history of mankind to prevent catastrophe and disaster in the future. The Computers calculate which changes are necessary, and the Technicians are the ones who execute the change, despite the consequences for millions of humans who will have their lives changed without even knowing about it.
Harlan is a natural talent, a famous Technician working with Senior Computer Twissell. Harlan falls in love with a non-Eternal girl Noÿs in the 482nd century, while he is also given the assignment to teach a young Eternal Cooper primitive history (ie, the history of the humanity before the twenty-fourth century). Slowly Harlan figures out why this is all happening to him, and what this all has to do with Eternity.
The book explores the paradoxes of time travel (what happens if you kill your own grand father), and the question of how far you will go for love. Because of the inclusion of characters that aren’t Eternals or are still learning, everything is explained to us readers in a natural manner. And together with Harlan we learn about the more complex issues of time travel and changing history/futures. I loved the changes in the story. As soon as you think it is going one way, you think you know what the characters are about, it turns out to be something slightly different. Harlan, while not entirely likable, is a very good main character, which completes the story with the time travel theories on one side, and Harlan’s personal problems on the other. The novel shows it age slightly (the use of punch cards for one thing), but overall it holds up well, even over fifty years later. Another great Asimov novel, five out of five stars.