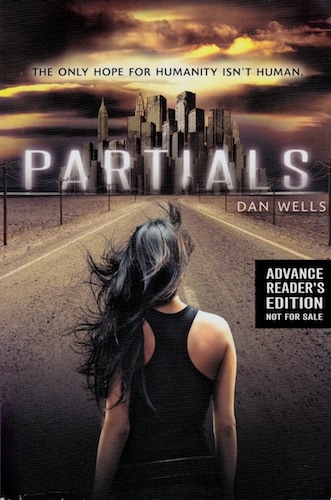 ‘Partials’ is the new book by Dan Wells, the writer of horror and thriller novels for young adults. His last series was ‘I Am Not a Serial Killer’, about a boy who seems fated to become a serial killer. This book is a very different start to a new series.

‘Partials’ starts out quite harsh, right on the first page. Immediately we, and Kira, a fifteen year old medic, have to deal with a new-born baby dying. This is something that happens so often, the baby isn’t even given a name and the mother isn’t even give a chance to hold her. Welcome to the world of the future, Long Island in the 2080s. To fight our wars, we have created Partials, enhanced human battle machines. When they had outlived their usefulness as soldiers, we used them as cheap labor in mines and factories. This led to an uprising and The Break, a period where the Partials attacked the humans, and where they, along with a killer virus called RM exterminated all but about 40.000 humans who are immune. The last settlements are on Long Island, and are divided by near civil war.
The reason for this unrest is the fact that no babies born after The Break survive longer than three days. They are all killed by RM. The Senate, the ruling group on Long Island, has used the Hope Act to try to find a solution. The Hope Act says that any woman eighteen or older should get or be pregnant all the time. However, all the babies, and all the research haven’t led to a cure so far, and the youngest child is already 14-year-old. If this keeps going, humans will go extinct. But Kira thinks she knows the way to a cure, and despite the risk and the unpopularity of the solution, she will seek help from the one place no one wants to find it; the Partials themselves.

I liked the book. Because Kira is a plague-baby (someone who was just a young child during The Break) she knows about as much about The Break and the Partials as we do. This makes sure that the explanations of the world and times in the story don’t feel forced. The book has action from start to finish, with daring mission, chases, and attacks. Sometimes the action was a bit too much, there are so many missions it is hard to feel excited about them all, and as we go along some of the things that happen get more unrealistic. For one, a lot of people seem to get hit, and die on the spot. It is annoying that Kira refuses to accept this and put the whole party in danger because as a medic she wants to do something for them. The reason why people follow Kira is unclear to me. In at least two of the missions there was an active discussion between two of the guys on who was the leader of the mission, but as soon as Kira said something, everybody followed her nearly without question, even though her suggestions are nearly always suicidal.

But all of this doesn’t take away the fact that it is an enjoyable book, that the world that Dan Wells has created is very interesting, and that despite the ongoing mystery of the virus and the Partials, this is a very nice stand-alone story. For those that enjoy young adult dystopian stories and some action, this is a recommended read. I give it four out of five stars